We had our first day in the hall today. This move is less disconcerting these days than it was when we started NYFOS@Juilliard in 2006. Going from a small room—in those days, my apartment—to the 1000-seat Peter J. Sharp Theater used to feel like a Great Disappearing Act, a kind of “Hey dude, whadja do with my SHOW?” Everything that had been vivid suddenly seemed tiny, everything that had been colorful suddenly seemed pallid in the larger space.

“Kurt Weill’s Berlin” is our 14th show at the school, and by now I’ve adjusted to the shock. In fact, I start to prepare for it early, encouraging everyone to sing out and spit their final consonants from Day One. But you never know till you get there if the singing is going to be audible and—more difficult—understandable. I’ve also gotten used to another obstacle: my piano is placed pretty far upstage, and while I can basically hear the singing, it’s pretty faint from where I sit.

I operate on pure faith in these situations, as if I were landing a plane in the fog. Instead of a control tower, I have people out in the house telling me everything is carrying (or not), and that the voice-piano-guitar balance is good (or not). Today I had a pair of Barretts: my co-artistic director Michael Barrett, and our wonderful German coach Marianne Barrett. A thumbs-up from them means things are really OK. Everything ran smoothly and it got better as the afternoon wore on, until everyone got a little too comfortable and we had a bit of verbal/vocal mush towards the end. 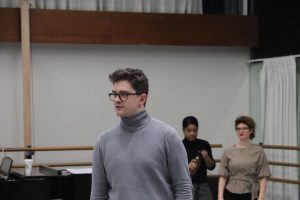 Of course, once you’re in the theater and you’re sitting in back of the action, it’s easy to disengage a bit. This was a tech rehearsal, and the afternoon was all about the stage pictures and the spacing. Let’s turn the chairs this way. No, that way. More distance between the two girls. No, not that much. You, go upstage of the chair, and you, downstage. I know it’s all important and needs to be worked out or the show will look sloppy. But it’s got nothing to do with me, or the things I most care about: the character of each piece, the psychological action, the colors of the voice and the piano, the progression of the story from verse to verse. I am just like Martha Schlamme who taught me most of these songs—“I care about the soul of the song,” she would always say, “not the…blocking.” That last word was uttered with regal disdain. Of course, she was not good at directing a show. She couldn’t work out problems of movement, and she wasn’t interested in them. It turns out that God is in those details too, whether I like it or not.

All in all, a heartening rehearsal, in spite of obstacles. Director Mary Birnbaum had to leave an hour early, at 4, to teach a class. And this was exactly when Jaylyn Simmons got out of her classes. Juilliard doesn’t make it easy. But the band—Jack Gulielmetti on guitars and banjo, and Nikolay Verevkin as a four-hand partner on four songs—is getting its act together. As undergraduates, Jaylyn and Jack have never had a chance to sing in this space, and they sailed through it all with flying colors. By and large we had a successful landing. Just a ton of tiny tweaks.

It was a relief after yesterday’s rehearsal, which was the single depressing experience of the week. I had called the whole cast together for a two-hour musical review. But we lost 15 minutes at the top because the room was still locked when we arrived, and my piano chair was elsewhere. So I started out in a bit of a temper, which I tried unsuccessfully to conceal. The cast had just finished their first day of the new semester, and the playful openness of the preceding week seemed to have evaporated. Everyone was tired and impatient. The whole thing felt like a forced march, and I seemed to be the cruel taskmaster. I had been hoping for a gentle musical communion, a final, joyful opportunity to hear them sing in my direction, not facing away and delivering their songs into a cavern. Instead we were treated to some brand-new memory slips and lots of unfocused, generalized renditions of the material. When 6 PM struck, they were out the door like guests storming a bar mitzvah buffet.

I realized afterwards that I should have given them a day off, and taken the two hours to work on the ensemble with Jack Gulielmetti and Nikolay. We’ve been essentially winging it the whole time, and it’s mostly OK, except for a few details of coordination. I kicked myself all evening, which worked out because I went to the pool where I have to kick anyway. I had bad dreams and a slightly upset stomach. The whole thing had disturbed me.

Photo above by James Russell: Greg Feldmann prepares to launch into “Caesar’s Death.”