Last Tuesday I was ready to rehearse Kurt Weill’s Berlin, and I am now ready to play the show on Thursday. But I was not ready for how deep it was going to cut. My soul has gotten a workout this week, in a wonderful way. I guess it all began with my gradual awareness of just how significant the songs were. As I’ve mentioned before (repeatedly), I’ve known them a long, long time. They’re old friends. So I could see intellectually that this was a very good project for our moment in history; on a practical level, I knew that the songs would lie well for my cast vocally; I thought they’d benefit from having them in their repertoire after the show was over. My ace in the hole: I was counting on the backup of our in-house German coach, the redoubtable Marianne Barrett. Done and done.

But I did not realize how emotional all of this would be for me. For one thing, Alvin Epstein died in December. I performed a lot of these songs with him—on Broadway, off-Broadway, all over the country. I learned of his passing 40 seconds before I rolled onstage to do a performance of NYFOS’s Yuletide show A Goyishe Christmas to You. Someone had emailed me his obit, and when I clicked on my phone in the dressing room—why in God’s name did I do that?—I saw only the beginning of the subject line, “Alvin Epstein, 94, Master of B….” The rest was cut off. But I knew. And the “B” was for “Beckett.” Alvin’s voice, his spirit, his fierce intellect hang over certain of these songs, and I am still accompanying his performance no matter who is singing. I had to suppress my grief instantly that night, but it has been emerging in recent days.

Over the weekend, I tried to see if I could find a video of Martha Schlamme singing the “Bilbao-Song.” I did not see one, but I found a recording on YouTube that included the spoken intro she always did before singing the piece in German. I wanted Will Socolof to introduce the song and I’d been trying to dredge it all up from my memory. And there is was, playing out of my phone, a phenomenon I still find mind-boggling. As I listened, I kept it together for about 35 seconds before dissolving in tears. I first played that song for her 46 years ago, and she included it in every single concert I played until her onstage death in 1985. (A story for another time.) Over dinner, my husband Jim asked to hear it as well—he’s heard so much about Martha but I rarely play her recordings. I clicked on it once more and this time I was OK for a full two minutes afterwards, at which point I began to bawl all over again. (Jim is sort of used to having a crying husband by now.)

Of course I sent the link to Will Socolof, who volunteered to transcribe it for our Sunday rehearsal. He delivered it with his own wonderful energy, and this time I managed not to make a spectacle of myself, moved as I was. That was a relief. 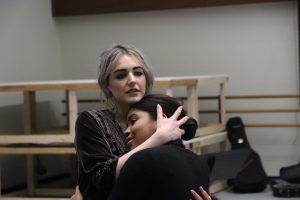 The other unexpectedly emotional element of our week-long Weill Slam has been the response of our guest teachers and lecturers. I watched the faces of Jack Viertel, Marianne Barrett, and Jeremy Lawrence as the cast worked through various parts of the show. I could see they shared my sense that something very significant was going on in that room. The songs are new to younger generation, but so intrinsic to the four of us—practically part of our DNA by now. There is something miraculous about hearing them brought to life so vividly, and sung with such powerful beauty. It gives us hope. The winter will pass, spring will come, perhaps the government will re-open one day, and a new day will dawn.