Today I invited my friend Jack Viertel to come watch some of our rehearsal. Jack comes from the highest reaches of the theater world. He’s written a masterful book called The Secret Life of the Broadway Musical  (a must-read for anyone who loves American musical theater); he is the Artistic Director of the Encores! Series at City Center; he is Senior Vice-President at Jujamcyn Theaters; and he’s taught at NYU. It would seem a bit scary to invite such a person to give notes to the cast, especially after only a few days of rehearsal. But Jack is one of the greatest mensches in the business—indeed, in our entire city. And he’s a close friend—hell, he was the toastmaster at my wedding. I kept anxiety at bay.

Jack has a deep appreciation of music, and is an avid listener to many genres, especially folk and blues. But he’s not a voice-fancier. A slightly overweighted chest voice or a wide-open F-natural won’t bother him. Anyway, my cast gets plenty of that kind of scrutiny during the semester. Jack was there to look more broadly at the songs, their structure, their meaning, their style—and to help us realize them.

I was afraid he might find my classically trained cast a bit naïve in their approach to acting. I mean, they’re studying to be opera singers, a genus not known for Thespian skill. I need not have feared. Jack Viertel, a Broadway baby, embraced them all as one of his own. He focused instead on specific moments in the songs, transitions that needed delineation. For Jack Kay, in “Sailor’s Tango,” it was where he sings the line “And that’s where they die.” Weill didn’t leave much space around it—the song rushes forward without a pause. But Jack V. said, “It’s a huge arrival point. Somehow you have to underline it, acknowledge it, and then move on.” He went on, charmingly, “Now, I don’t know how you’re going to do that, and that’s why I am not a director. But you have to end the chapter there. Maybe Steve and Mary can help.” (We can.)

The “Bilbao-Song” from Weill’s Happy End  has been a little difficult for the cast to understand. And it’s been hard for me to explain it—I’ve played it so many times I feel as if I am explaining my own skin to them. Jack was able to put it in context for them by talking about a jazz club he used to go to in Chicago. It was much like bar described in the song: it had great music, a clientele of regulars, seedy surroundings, and the occasional shootout in the middle of the evening. We listened to  Jack evoke that club, watched his face light up, and grooved on his language—that irresistible combination of sophisticated and salty, hundred-dollar words next to a series of F-bombs. After he talked to us, we were suddenly much farther on the road to “Bilbao.”

Perhaps the most precious moment was when Jaylyn, our youngest performer, sang “The Song of Indifference.” I’d taken a flying leap when I gave her the piece, since I’ve mostly heard it done by women several decades older. Jaylyn and I have spent a lot of time talking about it, feeling it together, filling in the details, looking for the right key (it is pretty rangy). When she got done today, Jack was bowled over. “Oh wow, that is a great, great song. And…wow, I just loved what you did. I have no notes!”

The rest of the day we continued to work through the show—we’re getting towards the end, which is a mitzvah. There were several eye-opening discussions about the interpretation of certain details, particularly a couplet in the Eisler/Brecht song “There’s Nothing Quite Like Money”: “For a girl’s knee only sags/At the sight of money-bags.” We eventually reached a consensus (I think) after I blurted out something (unprintable) that I probably have thought for forty years without realizing it. I instantly felt a little exposed for having such a louche interpretation, until Nikolay spoke up in his Russian-tinged English: “Oh, I definitely thought that’s what it meant.”

As Sondheim once wrote, “No one is alone.” Thank God. 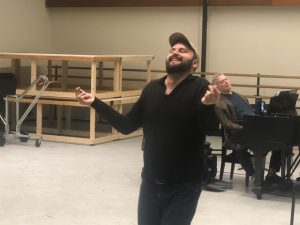