There is a certain thrill—and a certain terror—to watching a beloved song receive a new, honest-to-god staging. I’ve seen these pieces acted as solos by a cadre of great artists in recital and cabaret settings, but this is the first time I’ve seen some of them turn into full-fledged theatrical numbers with choreography and fleshed-out scenarios. My director Mary Birnbaum has a brilliant imagination, but sometimes I need a little time to wrap my brain around seeing them in their new clothes.

Case in point: Friedrich Holländer’s “Tritt mir bloß nicht auf die Schuh,” which I used to play for mezzo-soprano Kim Barber. It’s about a young woman who seems intent on making a splash as she enters a dance hall, clearly eager to pick up a guy. But she instantly gets in a lather as he demonstrates how clumsy he is. “You’ve messed up my dress, you idiot! And don’t step on my feet! Your passion is just making a mess!” Anneliese Klenetsky sings the piece this time, and she is having a field day mining the character’s knock-kneed wannabe pretensions. She gets the depth of her shallowness. But Mary has also pulled all the guys into the song to dance with her, and each of them in turn gets told off, punched, insulted, or offended.

I am happy to say that it ends with a line dance where the four boys and Anneliese execute some deliciously silly choreo with vacant, empty eyes—what Mary called “dead Kit-Kat girl face.” To get Greg Feldmann and Chance O’Toole back onstage, she told Greg, “Well, you come from upstage right, so imagine that you’re telling Chance, like, Wow, the weirdest thing just happened to me with a prostitute.” This is about the least likely thing I can imagine Greg ever saying in real life, and I made him say it out loud just so I could hear it with my own ears.

I am sort of responsible for one of the other stagings, at least the idea and story line if not the intricacies of the execution. In “Oh just suppose,” another Holländer tune (originally a solo song), baritone Jack Kay picks up a girl at a bar—Jaylyn Simmons—who seems like a fun person to spend the night with. And she is, except for one thing: she wants money before she’ll put out. Reluctantly, he shells out. Later in the song we learn that Jack has a new paramour, and (in a brilliant coup de théâtre, my idea of course) it turns out to be none other than Nikolay, my assistant pianist. Once again, everything is heating up between them and all missiles are set to launch when Nikolay also asks for money. What are the odds of that, thinks Jack, a fille de  joie and a rent-boy in the same week, both by completely by accident. And of course, once again he pays. In for a penny, in for a pound. 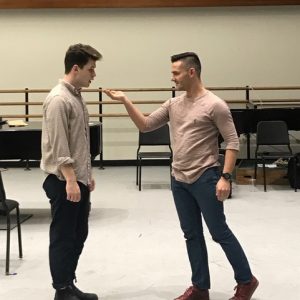 Nicolay turned out to be a very charismatic performer, graceful on his feet and elegantly clear as an actor. Will Socolof caught the moment on film when he pulled away from Jack’s kiss and put out his hand as if to say, “OK, baby, now the meter’s on.”

I’ve alluded to some of the singers but I want to introduce all of them today. The bewitching soprano Anneliese Klenetsky you’ve already met. She’s joined by the Israeli mezzo-soprano Shakéd Bar, who has an amazing gift for putting over these Weimar songs—she slips into them as if they’d been written for her; and the baby of the cast, soprano Jaylyn Simmons, a creative and uninhibited young lady who keeps surprising us with her imaginative daring. Baritone Greg Feldman is a guy I have come to lean on for his eloquence and peerless musicianship. I treasure every chance I get to make music with him. But this is my first show with the other three boys: tenor Chance O’Toole, a young man who blends a professional’s polish with a child’s sense of play (a killer combination); baritone Jack Kay, who is fearless, sensitive, and generous in ways that take your breath away; and William Socolof, a bass-baritone I’ve worked with since his first days at school. William’s performing has taken on a kind of magisterial authority in tandem with megawatt charm. When he sings, he owns the room, he owns the song, and he will certainly own the audience.

I am grateful to all of them.