Kurt Weill’s Berlin went into rehearsal today. This is the show I chose for the 2019 NYFOS@Juilliard concert, a program I’ve done a couple of times before—in 1998 and 2004, when it starred Peter Kazaras, Kim Barber, and Connie Hauman. I’ve known some of the songs for four and a half decades, so to keep things fresh I made sure to program one piece new to my repertoire. But much of the material dates from the early years of my career when I was pianist for Martha Schlamme, a folksinger and cabaret artist who brought these songs alive in the 1970s and 80s with Alvin Epstein, the great actor and director who died only last month.

As familiar as the material is to me, it is new to the cast and director. I am always hoping I can help them find their way without imposing my decades-old interpretations. It’s tricky: every piece plays its own venerable mental movie every time I play them. As a result I don’t always agree with some of the things the cast says about them. It’s my policy to leave the singers free to run their own mental movies if their performances are alive, connected, and true. Just deliver the goods.

But let’s face it: after decades you have what is known as an interpretation: pauses you’re used to; your own accelerandos and ritards—places where the tempo speeds or slows; an inflection that you heard so many times it seems to be part of the fabric of the music itself; a swirling sense of the way the piece moves. And I think it would be foolish to give up what I’ve learned. I try to take the approach of a sheepdog, gently herding my singers with a variety of musical signals that point them in the right direction. And I am staying alive to the new insights they are bringing into the room. 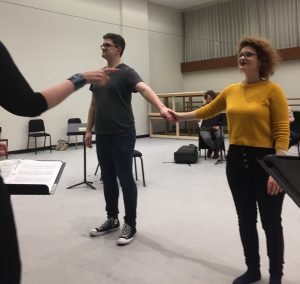 We had our first run of the whole program today, and it went extremely well. There were plenty of heart-stopping moments where we all felt the sacred fire in the room. And the program has a strong arc, just as I remembered. But I wasn’t quite prepared for how powerfully Kurt Weill and his fellow Weimar songwriters would speak in 2019. “Jenny’s Song” from Mahagonny sounded like the defiant cry of a Latino immigrant at our southern border. “Wie lange noch,” which Kurt Weill wrote during World War II for broadcast behind enemy lines, seemed ripped from today’s headlines. So did “Caesar’s Death,” from Silverlake, the last theater piece Weill wrote in Germany. At that time it received only one full performance before getting banned after its opening night. This defiant song about a tyrannical megalomaniac was one of the reasons why.

Everything in our program resonated in a new way. Everything was fresh and compelling. Everything needed to be heard now.

I’d worked on the show over the vacation break and I think I was able to get those songs back into my hands in a satisfying way. It’s bad luck to say so, but I felt fabulous at the piano today, so happy to at my music-machine. And of course, I was buoyed up by the first-class talent in the room.