I’ve just returned from seeing the HD broadcast of Stephen Sondheim’s “Follies” from the National Theater. It starred a colleague of mine, Janie Dee, as Phyllis. I worked with her when NYFOS brought our P.G. Wodehouse concert to London. She was a delight, and a powerhouse performer. And she was staggeringly good in tonight’s “Follies”—a Phyllis to rival the best actresses I’ve ever seen in the role: venomous, cold, but full of hidden longing and sadness.

“Follies” is one of the greatest pieces of musical theater ever written, and every production is worth seeing because they are all so different. Its brilliances are many, but the thing that always gets to me is the way it portrays the process of aging, especially the ways performers age. The story is about a reunion of showgirls, and the theatrical conceit has the stage filled with all of their youthfui ghosts flitting in and out of the scenes and songs. At one point early on, we see an old couple do the dance they did 50 years ago while their ghosts—visible to us but not to them—execute the same steps with the lifts and leaps of youth. It’s a lightweight number, “Rain on the Roof,” and it always makes me cry.

I don’t recommend seeing “Follies” after a week of mentoring a pianist one third your age. I was a teary mess all evening. It was cathartic, and meaningful, and wonderful. But intense.

We had our dress rehearsal today, and we’re in great shape. As usual, there were a couple of bobbles and glitches and dropped lines. These things never bother me—get them out of the way on Saturday so they won’t happen on Sunday, I feel. But the level of singing and playing is astonishingly high, as is the creative spirit motivating it all. Mikey and I are on Cloud Nine.

And there were some lovely surprises. One of them happened after lunch. I’ve programmed a song by Hubert Parry, an important composer in English musical history but perhaps not one of the greats. As we were preparing to go back into the hall, we were approached by an Englishwoman who works at Caramoor. “You’re doing Parry!” “Yes,” Mikey and I answered. “Oh, how wonderful!” “Will you come to the concert?” Silence. “Well, I…shall try. But I do especially want to hear the song by Parry! He wrote the hymn ‘Jerusalem,’ you know!” In all my born days I would never have thought that Parry would be the hook to get someone to attend my concert. Live and learn. 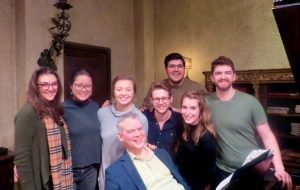 I try to imagine what it was like for the cast to receive notes after the run-through. First they got my suggestions (think Obi-Wan-Kenobi); then Kate McGonigle’s diction and acting notes (think Michelle Dockery, of “Downton Abbey”); then Mo Zhou’s directives (think Lucy Liu after a LOT of coffee). It’s quite a salad, and they seemed to eat it all.

I can’t divulge too much about this, but my underwear is making its stage debut tomorrow. It’s a prop in the Noël Coward song. I am very, very excited.

Be there! Sunday at Caramoor, Tuesday in Manhattan at Merkin.