Today we went into uncharted territory when our director, Stephen Barker Turner, reported for work. I hired him sight unseen on the recommendation of two other directors I’d invited. They had to back out of the gig because of some late-breaking auditions and film jobs, and they thought I’d like working with Stephen. I knew that this concert, which tells a complex story through an intricate playlist, would benefit from the care of a theater person. Prior to our meeting today, Stephen and I spent some time on the phone talking about the program—that was his “audition.” I was impressed by his gentleness, his kindness, and his intelligence. He’s a Juilliard graduate with a sturdy resumé, he seemed to get what I was trying to do with Love at the Crossroads, and I decided to invite him on board. 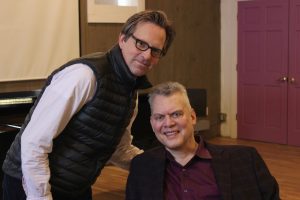 Unlike most of the directors I’ve worked with in the recent past, Stephen has not had a lot of experience with the demands—and limitations—of the concert stage. Song repertoire is not his wheelhouse, and he has not worked much with classical singers. All of this turned out to be an advantage, not a deficit. It seemed to allow him to see everything with freshness and imagination. I especially loved his detailed sense of the dramatic arc of every piece. All afternoon I felt I was seeing my deepest and most intuitive feelings about the songs springing to life in the rehearsal room, and I understood some new things about pieces I’ve known for decades. You never know if you can really collaborate with someone until you try. But Stephen and I found a groove today that exceeded all my expectations.

His vibe is different from my recent artistic partners. Stephen is internal, humming rather than sparky, soft-spoken rather than showy—a kindred spirit. I loved the way he found the internal life of each song and let the staging flow from that, rather than creating a lot of catchy stage pictures and bustle. The energy comes from the four singers, who are bursting with life. There’s no lack of show biz, but Stephen’s maturity also brings out everyone’s depth. 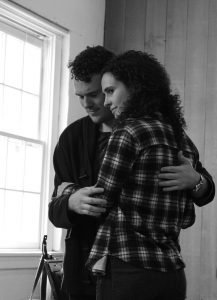 There were some stunning moments today. Philippe L’Espérance and Devony Smith are singing a Sondheim duet, “Country House,” in which a couple’s attempts to restart their relationship end up in a nasty exchange of invective. I always think of Philippe as sweet and eager, the quintessential lyric tenor. I wasn’t sure he was quite right for this piece, but—oh lord, he can be a monster. (I mean that as a compliment.) After he lashed out at Devony I saw a tear come into her eye, and then she lashed back. Hard. Then all hell broke loose—it was like watching a traffic accident. Breath-taking. 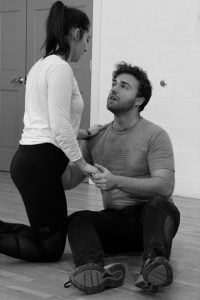 Erik van Heyningen and Gina Perregrino went to the other end of the spectrum with their Lalo duet. Stephen took a fresh look at it and got us all thinking about the essential question: what is the event of this piece? Gradually a lovely, somewhat generic romantic duet turned into something arresting and surprising: an experienced seducer finds himself utterly vulnerable, while a rather unsure young woman suddenly senses the power of her femininity. All of this unfolded spontaneously under Stephen’s gentle guidance—and, I admit, a bit of mine as well. You see, I was also truly hearing the piece for the first time, though I’d known it for decades.

I haven’t written much about Danny Zelibor, our pianist. He made some beautiful music today, sparkling and flowing. I don’t know what he’s eating at night, but whatever it is I could use some of it. The piano’s been fighting me all week, and today I was on the verge of taking a hatchet to it. I felt like I was on the IRT, but Danny was on the Concorde this afternoon.

Hear this complex story told through an intricate playlist at Love at the Crossroads
Sun, Mar 17 at 3pm at Caramoor (Katonah, NY) or Tue, Mar 19 at 8pm at Merkin Hall (NYC)