We got word yesterday that a major snowstorm was headed our way. It would certainly make the city a slushy mess, and these storms are usually even more severe in Westchester. By lunchtime yesterday, Katonah hadn’t completely recovered from the previous Friday’s monsoon. Several people on the Caramoor staff still didn’t have electrical power at home. 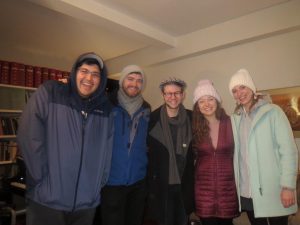 There was no fighting the weather report. For the first time, the cast got packed off to New York. All the guys have apartments here, but the two women are from out of town. They were lodged in a hotel. At first the severity of the storm seemed to have been wildly overestimated. While the snow was supposed to start at 1 AM, it didn’t really kick in until 10 hours later. But then it turned the city into a picturesque Winter Wonderland, at least as seen from the comfort of my apartment. Outside it was an assault of insultingly wet precipitation.

I was sorry that we had to give up our Caramoor sanctuary in favor of the sanctuary of my home. But we had a beautiful day of work here. Today we welcomed our first guest teacher, Kate McGonigle. She is a recent graduate of Juilliard’s Drama Division, and I’d seen her in a couple of Shakespeare plays at school. But she and I had never met. Our email exchanges and phone conversations had given me a very good feeling about her, and this was confirmed when we got to work.

I had asked Kate to come and work on issues related to language. How British did we want to sound, or need to sound? Some things, like the Gilbert and Sullivan scene, need the King’s English. In other songs, like Frank Bridge’s “Dweller in my deathless dreams,” the insistence on British diction sounded intrusive and fake. Kate is a laser surgeon when it comes to the English language and she helped everyone find their footing. Like all good teachers, she also made everyone in the room feel confident, including me.

One of my favorite moments of the day was our work on the scene from “Iolanthe.” First Greg and Madison read it, to Kate’s obvious delight. One is always afraid that actors will roll their eyes when singers speak dialogue. All of us have heard that weary intake of breath, followed by the barely concealed disdain of “OK…hmm. Well.” We know it from our directors and our conservatory acting teachers, and it is not inspiring.

Kate, on the other hand, reveled in Greg and Madison’s reading of the scene. Of course she had some diction notes, which we got used to hearing repeated all day. “No ‘r’ in the word ‘her,’ or ‘we’re,’ or ‘inspire.’ Words with a ‘t’ get clipped short.” And then there were all the varieties of “ah” vowel: chahnce” and “hahf” and “pahss,” but “lass” and “land” and “stand” closer to the American pronunciation. “All” is pronounced “awl.” “There’s no logic to it, sometimes we have a broad ‘ah’ and sometimes we don’t,” said Kate.

And oh, the sheer delight of that G&S scene, my favorite three minutes of the whole Savoy canon. I was in heaven, grinning like a child after a shot of bourbon. After Madison and Greg read it, Greg read it again, this time with Kate playing Phyllis. Then Madison read it with Kate as her Strephon. Kate is one of those artists who can make you laugh without appearing to do anything at all, certainly nothing you could imitate. She doesn’t appear to work to make the comedy happen. She simply says the line and everyone in the room is giggling.

But everyone in the cast had wonderful comic moments. Matt and Madison are singing an English folk song arranged by Ralph Vaughan Williams. It’s a dialogue song, and I divided up so it could be a duet. The two have them have made it into a delicious little scena. Matt has to say the words “She answered me” eight times, and each time it is completely different—and hysterically funny. 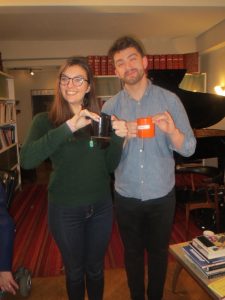 Other highlights of the day: Adam and I did an impromptu four-hand version of the Stephen Storace aria and gave Madison the kind of orchestral support only 20 fingers can offer. Kayleigh broke all hearts with “Think Not, My Love.” We had a picnic lunch and a decadent tea-time. Let it snow, let it snow, let it snow, say I. I’d been afraid that leaving Katonah meant that we’d be breaking the thread of our work. Instead, I think we bonded even more here than we had upstate. One piano, one living room, everyone huddled together dropping their r’s. And making Art.

Get your tickets to From Lute Song to the Beatles today!
March 11 at Caramoor in Katonah, NY
March 13 at Merkin Concert Hall in NYC