I always look forward to the first day of Caramoor rehearsal, but I also fear the first day of Caramoor rehearsal. This year’s outing, Four Islands, is a complicated show with songs from Ireland, Cuba, Madagascar, and Manhattan in five languages (including Gaelic and Zulu). It has music hall, vocal chamber music, Afro-Cuban heat and contemporary cool. I knew one of my cast members well, and another was a singer with whom I had a short but fruitful acquaintance. The other two were people I believed in but actually knew very little. So was my pianist. 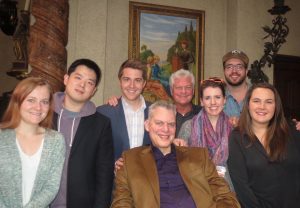 My instincts led me right: this is an adventurous and gifted cast, and they seem ready to take it all on. There was a moment this morning when I asked pianist Ho Jae Lee if he wanted to take over for a bit. At that point we were working on a Cuban piece called “Guarina,” and we’d just decided to perform it a half-step higher. Ho Jae ploughed into the song with grace and assurance, embellishing the printed page with his own touches, and soon playing with a combination of fire and subtlety that made my flesh tingle. Christine Price, my soprano, caught my eye and nodded her head with a smile that said, “Yup, he’s our guy.” Then a charming thing happened—Ho Jae got a little carried away and lost control of the transposition for about a measure before righting himself. It’s exactly the kind of thing that happens to me when I am on a roll that turns into a skid, and it endeared him to me forever. I later realized: we were hearing Ho Jae’s first-ever Cuban song. It’s also his first-ever Irish music, his first-ever American musical theater, and his first-ever Chansons madécasses. I described him as “an ocean of music,” and I am thrilled to lead him into uncharted waters.

I wanted Naomi O’Connell to come and coach the Gaelic song, and also to check in on the rest of the Irish material. Normally I prefer to have our guest teachers up a little later in the week after we’ve gotten to know one another and put things in place. But Naomi’s schedule dictated that she had to be with us today. I needn’t have worried: Naomi, who was my student at Juilliard, is a magnificent teacher. I’d never seen her in this role before, but she is sharp about the details, full of useful rehearsal techniques, and a laser surgeon when it comes to vocal, dramatic, and muscular first-aid. I have found that singers like to have another singer helping them. No matter how smart, how caring, or how intuitive I am, I shall never quite attain the level of trust that vocalists accord to one of their own. Naomi had my trust too, and she set us up for the week. I hope I can keep the vibration going. My favorite moment: getting Jack Swanson to say “I know a girl that could knock you into fits” with perfect Irish intonation. “Gir-ell!” “Girl!” Noooh, Jack, tooh syllables: gir-ell!” “Gir-ell!” “Good. Knock ya into FITS!” “KNOCK you into fits.” “No! Jack! Imitate me: knock yuh inta FITTTS!” “Knock yuh inta FITTTS!” “That’s it. [Turning to me] This one’s a good mimic!”

It was something of a miracle that I got to rehearsal at all. Michael was determined to be at Caramoor for the first day, and he is the designated driver of the wheelchair van that takes me back and forth. He had just flown in from Hong Kong, after a 22-hour trip that landed him at JFK at 6 AM this morning. But there he was at my door, right on time, focused and coherent and full of his usual sweet energy. It was a day of heroism and bravery, with everyone stepping into uncharted terrain. But Michael Barrett walked off with the prize: Hong Kong one day, Katonah the next, without missing a beat.