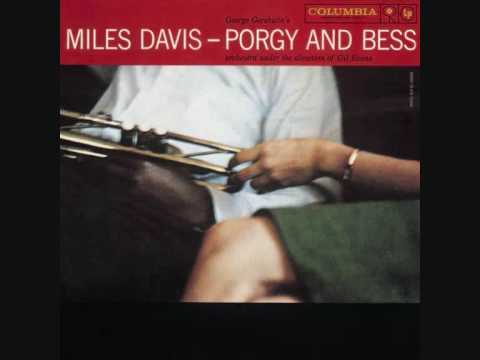 Gil Evans is one of the greatest jazz orchestrators/composers/arrangers in history. Miles Davis is one of the best jazz arrangers/instrumentalists in history. Put them together and you have some pretty magical music. In the 1950s, Gil and Miles arranged and orchestrated the music of George Gershwin’s famous opera Porgy and Bess for full jazz orchestra. Columbia Records released the album in 1958, but I didn’t get my hands on it until 2006. Growing up, I was obsessed with three things: Girls, Porgy and Bess, and big jazz orchestras. Count Basie Orchestra and Duke Ellington’s orchestra were some of my favorites. Porgy and Bess was the first opera I ever performed in. I was 4 years old. That exposed me not just to the world of opera, but also to the world of Jazz. Porgy and Bess means the absolute world to me for countless reasons, but the main one is that it introduced me to music, performing, and singing! By the time I was a teenager, I was introduced to the Miles Davis recording of Porgy and Bess and my mind was blown. What I was most impressed with was that Evans and Davis managed to keep the integrity of the original composition. They leaned into the improvisational and jazzy sections and stayed true to the more Wagnerian sections. To me, it’s one of the most satisfying recordings to listen to as a Porgy fan. One of my favorite pieces from the album is “Gone, gone, gone.” As a kid, hearing the chorus of Porgy and Bess sing “Gone, gone, gone” would give me chills down my spine. That particular scene for me was difficult. The scene takes place at a funeral the community organizes for a beloved member that has just been murdered. For most of the productions I performed in, the character that has been murdered was played by my father. I didn’t have any singing lines in that’s scene, so it was a lot of standing around looking at my father’s seemingly dead body. It wasn’t a bundle of fun for me to perform that scene. The one thing that made it better for me was how beautiful the music is. The central theme of Gershwin’s “Gone” was arranged in a very jazzy and adapted style for the Miles recording entitled “Gone”. However, “Gone, gone, gone” is another track on the album where the orchestra plays the tune again but almost verbatim from the operatic score. They managed to create the spirit of each community member solo. They found a way to say the text in their instruments. They brilliantly executed the feeling of grief and loss through their interpretation. Without knowing the story of that scene, or Porgy in general, one would still love the heart and soul of this incredible recording of an outstanding piece of music.