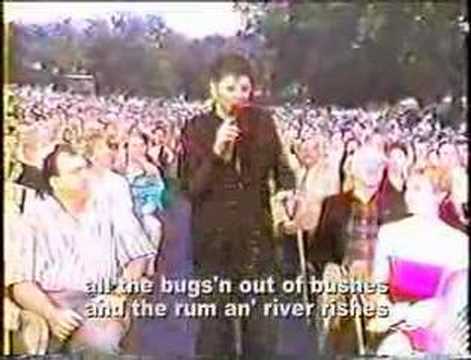 Bass Matt Boehler answers our questions on his background as an actor and journey toward composition as our Artist of the Month. Matt is returning to NYFOS on later this month in Manning the Canon in Orient, NY and NYC, and next season in Lyrics by Shakespeare (single tickets available July 8, but you can subscribe now!)

You are active as both a performer and a composer. How do you balance those different disciplines as you move through your career?

It’s taken a long time for me to give myself permission to put the word “composer” in the same paragraph as the word “singer” in my biography. However, now that I’m in the everyday practice of both writing and singing, doing more than one thing doesn’t seem unnatural. It’s not a binary situation, where either I’m a singer, or I’m a composer, and that’s it. It’s developing into a pleasant co-existence where both disciplines feed the other. After all, the idea of being a performer and a writer is nothing new—back in the day, it worked for Bach and Moliére, and it works just as well now for Caroline Shaw and Lin-Manuel Miranda. Ask your friendly, neighborhood troubadour—she’ll tell you all about it!

You trained formally as an actor before earning your degrees in music. What made you decide to shift your artistic focus?

It was a gradual shift, and, in hindsight, it makes absolute sense. Before I decided to pursue theatre in college, I loved classical music. Then, at school, we were encouraged to take voice lessons so that we’d have greater versatility as actors. It was there that my first voice teacher, Jerry Benser, gave me a great technical foundation, and introduced me to the world of opera and art song. After school, even though I was working a lot in different corners of musical theater, I realized there were things that I had to offer that served opera better than musical theater and straight theater—because of my height (6’7”), I’d often get “typed out” in musical theater and straight theater auditions; in opera, my height is an asset. Musicals don’t have much repertoire for real bass voices; in opera, you always need a bass for something. Opera and song are at the crossroads of these two things I love: music and theater.

Does your acting training impact your approach to singing or to writing music for the voice?

Yes, and yes. In every way.

You are part of the original cast of Manning the Canon and have been back for each revival, including this month’s iteration in Orient, NY and at The Center. What’s special about this show to you?

This is a program that is near and dear to my heart. I have so many good memories of this show, both on stage and off. I’m so grateful to Steve for putting together a program of songs that not only celebrates and embraces queerness, but is full of songs with such rich terrain for us performers to explore. To be a gay man, and to be performing this particular program in New York during the recognition of the fiftieth anniversary of the Stonewall riots, and during World Pride—it’s very moving, and very humbling. I can’t wait to make music with these boys.

Your brother is getting married this month! Will you be singing at the wedding? Does your family often get to hear you perform?

I will be singing at the wedding, and then I’ll be dashing off to our first performance in Orient…that very evening!

Every now and then, yes, my family gets to hear me perform. I’m on the road a lot, though, so it’s often difficult to meet up. But I’m close with my family, and I’m always so happy when they are there.

Right now, I’m joining Steve for a concert here at Wolf Trap, along with nine other fantastic musicians. I’m immersed in our particular world at the moment, and we have our first concert in a few hours. That is the music that is ringing in my ears at the moment. It’s great fun, and we’re ending the first act with the beginning of Kalmán’s operetta, Arizona-Lady, complete with all sorts of pastoral, barnyard sorts of noises.

Speaking of barnyard noises, this is a little piece of bizarreness that I’ve been unable to shake off of my recent playlist—it’s from an “operetta for guitar and daxophone”:

With friends, with family. Life is short, our music ends too soon.

A song can contain a whole world. It’s storytelling, and storytelling combined with music has a way of moving us that defies explanation. There’s nothing like it, songs are magic.

Okay, I feel I can wriggle out of this one a little bit by just limiting this to one genre. As far as art song goes, that’s pretty easy. It’s Montparnasse, by Poulenc. (I fawned over it during my turn at song-of-the-day a while back.) And Scott Murphree will be singing it on Manning the Canon in just a few weeks!