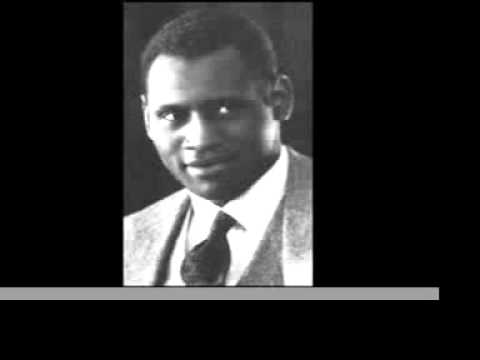 Five years after his production of The Cradle Will Rock was abruptly cancelled by the Works Progress Administration, Marc Blitzstein composed the score for the 1942 anti-fascist, anti-KKK documentary film Native Land, featuring today’s selection, “American Day.” Paul Robeson, frustrated with the type-casting of black performers in Hollywood, sang in and narrated this, his final film. Bosley Crowther of The New York Times had the following reaction to the film on May 12, 1942, following its premiere:

“Although this country is today engaged in open warfare against a foreign enemy which threatens our national heritage, the struggle to preserve our rights and freedom has been marked by long and bloody strife. And it is to remind us of the fight which the American people have waged to win and hold their civil liberties, especially against “the fascist-minded on our own soil” in recent years, that Frontier Films is presenting the feature-length documentary film, ‘Native Land,’ which opened at the World Theatre last evening…. Manifestly, this is one of the most powerful and disturbing documentary films ever made, and certainly it will provoke much thought and controversy. ‘Native Land’ is a graphic presentation through re-enacted scenes of incidents of brutal violations of the American Bill of Rights as revealed in actual testimony before the Senate Civil Liberties Committee in 1938. It is, to put it bluntly, a sharp indictment of certain subversive elements in this land—elements which are never precisely identified, other than by such terms as “the big shots,” “the interests” and “powerful corporations,” but which emerge by implication as all foes of free speech, of free assembly and the active opponents of labor organization.”

Would that I could draw no parallels between 1942 and 2019. Sadly, it seems racism and fascism are on the rise throughout our world over the past few years, and corporations have inexplicably mutated into persons more powerful than people. Will we ever learn, or are we destined to be caught in a perpetual “Groundhog Day?” Are we just “millions of ordinary people, who take the Bill of Rights for granted?”

← Prev Post: "Cole Porter: I've Got My Eyes on You" Next Post: Kurt Weill: Und was bekam des Soldaten Weib? →