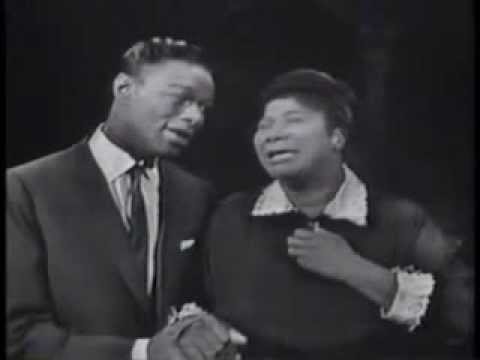 We revisit a week of Black American spirituals curated by Michael Barrett. This post originally ran on September 29, 2015.

Today’s Song of the Day features Mahalia Jackson and Nat King Cole in “Steal Away.” The lyrics are “Steal away, steal away, steal away to Jesus. Steal away, steal away home. I ain’t got long to stay here.” Again, it is code for an escape to freedom. This recording from 1957 is a good reminder of how gospel music was (and in some places still is) accompanied—a piano and a hammond organ with all its vibrato. The spiritual is beautiful, and even though it is one of Harry Burleigh’s original settings, it doesn’t seem to be a favorite of singers. Its internal qualities perhaps don’t make it a frequent choice for recitals, but it has long been near the top of my list. In Ms. Jackson’s voice (and her glacial tempo), it’s a wonderful piece of American history.