Choosing a program for NYFOS’s annual residency at Juilliard is usually one of the year’s sweetest dilemmas. No dilemma this time, though. I knew more than a year ago that I would want to revive Kurt Weill’s Berlin as the 2019 project. My singers have strong feelings about today’s politics, and I was sure they’d see the connection between Weimar Berlin and contemporary New York. While Kurt Weill and Hanns Eisler are not unknown to today’s crop of young artists, they still had a lot to discover about them. And I knew that they would enjoy the freewheeling sexual politics in the songs by Tucholsky and Hollander.

I could not have anticipated in January of 2017 the mind-boggling clown car of today’s 24-hour news cycles. The material in tonight’s concert is like an eerie portent, a Roaring Twenties prequel to our times. In the middle of a rehearsal of “Caesar’s Death” baritone Greg Feldmann was so startled by the contemporary relevance of the lyrics that he turned to me and blurted out, “Steve, when was this thing written?” I admit that I have been just as gobsmacked by the timeliness of these songs as Greg, even though I’ve known them and played them for decades.

The music we’re hearing tonight actually comes from three different genres: musical theater, political song, and Kabarett. Weill, of course, is a man of the theater. His collaboration with Bertolt Brecht lasted only four years, from 1926 to 1930. But the works they created, including The Threepenny Opera and Mahagonny, started a revolution in theatrical style. Weill had been a student of Engelbert Humperdinck (of Hansel and Gretel fame). Following in his mentor’s footsteps, Weill had his first big successes in the realm of opera. Der Protagonist launched the young composer’s career in 1925—at opening night there were 35 curtain calls and 10 solo bows for the composer.

But the sweet-and-sour complexity of Threepenny in 1928 was something Germany had never heard before. Weill’s music is tonal, but it is laced with lots of intentional off-key bass notes. The songs don’t always end in the keys in which they began, drunkenly veering off into foreign tonalities. Combining seediness with sophistication, they are in-your-face and confrontational. But they also exhibit a rare sensitivity, exposing his characters’ unstated vulnerabilities. Just one example: in his masterful “Nanna’s Lied,” a used-up prostitute quotes Marx and François Villon as her music veers from accusatory bitterness to sweet, sensitive regret.

We’re giving special focus to two of Weill’s works tonight, Happy End (written with Brecht) and Der Silbersee (written with Georg Kaiser). They each contain some of Weill’s finest songs, and they each were shut down right after their premieres. Happy End, whose plot is startlingly similar to Guys and Dolls, was the much-anticipated follow-up to Threepenny. Weill wrote a sensational score, using a richer musical vocabulary than he had for the previous piece. But on its opening night, the leading lady

(Helene Weigel, soon to be Brecht’s wife) suddenly went off-script and started declaiming from a Communist pamphlet. Riots broke out, the show was panned, the public shunned it, and Happy End closed within a week. A beautiful revival at the Yale Rep in 1972, in Michael Feingold’s translation, finally brought Happy End back to life.

Der Silbersee (Silverlake) was Weill’s final work in Germany. By 1933, the outspoken, left-wing, Jewish Weill was persona non grata in Hitler’s Germany. Opening night managed to go off without a hitch, but the Nazis interrupted the second performance with a demonstration, shutting it down in the middle of the second act. Suddenly the two other German theaters that were set to do productions of Weill’s latest musical cancelled. Weill’s music was banned in Germany, his manuscripts were burned, and within two weeks Weill fled Germany to take up residence in Paris. He never saw his homeland again.

Kurt Weill’s music shares the stage tonight with songs from Berlin’s Kabaretts. While he sometimes professed a certain disdain for Berlin’s nightclubs, it’s obvious that Weill’s scores in the late 1920s borrowed freely from their loose-limbed style. The cabaret scene ran a wide spectrum. Some catered to the city’s intellectuals with political satire; some were geared to the tastes of the wealthy, with elegant settings, witty songs, and fine dining; still others—called Tingel-Tangels—were cheap honky-tonks where both the drinks and the entertainers were for sale. You could find sophisticated literary parody, sentimental celebrations of bourgeois life, left-wing political satire, right-wing rabble-rousing, naked dancing girls, and gay bars. Fads would last a few months or a few years. And some very talented people dished out startlingly vivid material, with clever words and catchy tunes. The songs by Frederick Hollander, Mischa Spoliansky, and Rudolph Nelson are at once ephemeral and timeless. While they weren’t intended to last, more than one of my students have commented, “Oh jeez, this song is about me!”

Composer Hanns Eisler and lyricists Kurt Tucholsky and Walter Mehring provide a window into Berlin’s political cabaret. After Brecht and Weill ended their partnership, Eisler (a fervent Marxist) became Brecht’s musician of choice. His music tends to be less juicy, less ear-catching than Weill’s. Eisler’s slightly academic dryness suited Brecht, perhaps because it provided a plainer background for his lyrics. Still, Eisler at his best is capable of humor and passion, and some of his songs have an unforgettable directness—especially “Der Graben,” his moving pacifist anthem.

Mehring was an uncompromising artist, stopping at nothing to startle the public out of its complacency. He invented a rapid-fire rhyming style— I think of it as “Weimar hip-hop.” We’ll get a sample of Mehring’s technique in a song actually written by Hollander, “Tritt mir bloß nicht auf die Schuh,” with its string of tongue-twisting two-syllable rhymes.

Of all the poets and composers on tonight’s program, Kurt Tucholsky is the one I would most like to have known. A committed pacifist, he tried to keep war at bay through essays, newspaper articles, poems, and song lyrics. Tucholsky was an astoundingly perceptive writer, and his psychological acuity has turned him into a hero among today’s younger Germans. Once banned by Hitler, he is now anthologized and lionized.

Der Silbersee offered the German public a much-needed fantasy: at the end, the principal characters escape their pursuers as the lake of the title miraculously freezes. They are able to walk across the ice to safety. Alas, this fantasy did not await many of Germany’s Jews, gay people, and dissidents. All the artists on tonight’s concert survived the ravages of the Third Reich—except Tucholsky. He left Berlin in 1924 when he became the Paris correspondent for a number of Berlin newspapers. But he continued to supply Kabarett lyrics from his Paris apartment. Left-wing cabaret, agitprop theater, pacifist journalism, and Communist demonstrations all proved useless against the rise of Hitler. Tucholsky emigrated to Sweden. But in 1935, unable to obtain Swedish citizenship and already overwhelmed by the Nazi era, he decided he’d seen enough. He took poison and ended his life. Tucholsky’s tombstone quotes from Goethe: “All that passes is but a riddle. 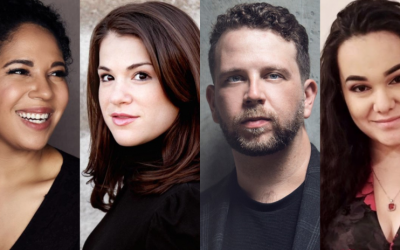 END_OF_DOCUMENT_TOKEN_TO_BE_REPLACED

The idea for this program came to me a few years ago over breakfast one morning. The gentle, rational voices of NPR’s...