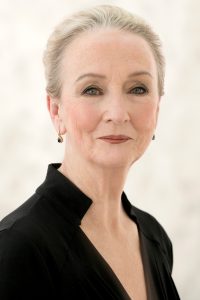 Celebrated actress Kathleen Chalfant answers our questions as NYFOS’s Artist of the Month in advance of her sold-out performance in NYFOS’s Lyrics by Shakespeare in the 2018 Mostly Mozart Festival at Lincoln Center.

You received a Lifetime Achievement award at the 2018 Obies (Congratulations!) How does it feel to be honored for a ‘lifetime’ of work?  What does that mean to you as you continue to perform?

I was deeply honored by the OBIE and especially moved by it since it was given to me by the community that I’ve spent most of my time in during my career in the theatre. It is odd in two ways to think of a “Lifetime Achievement” award though: the first is I think all of us who perform have some sense that we are just at the beginning of our work and that in some way you start over every time and the second of course is what next? since this is a long career and at this point I have things to do through the spring of 2019 and hope that there will be some achievement to come—but mostly it is a lovely thing.

What advice would you offer a young performer who hopes to build a career as longstanding as yours?

First of all be prepared when you are offered an opportunity—performing is so often a matter of lucky, of being in the right place at the right time and should someone ask you to do something you’d best be ready. You can never tell when it might happen. And also it is important not to fall into despair in the times when things aren’t going as you imagined they might—if this is something you want to do more than anything try to find the joy.

This year marks the 25th anniversary of your official Broadway debut, which was in Tony Kushner’s Angels in America: Millennium Approaches.  What was it like to be a part of such a landmark production?

I have been very fortunate in my life to be part of a few really important new plays but being part of ANGELS while it was being made for the first time was to be a part of the history, not only of our time, but of the theatre itself—and this was one of the times when we knew it was going to be a big deal almost from the beginning. It was a great privilege and a great piece of luck.

It’s also the 20th anniversary of your award-winning performance in Wit. What has stuck with you, or now seems most significant, when you look back on that experience after all these years?

Margaret Edson wrote WIT as a teaching tool and the greatest satisfaction of the many satisfactions in doing WIT is that it was a peerless teaching tool and was a very important part of the movement toward palliative care and of the investigation of the best form of doctor patient relationship. I found myself talking to doctors at Memorial Sloane Kettering about palliative care—a kind of magnificent version of “I’m not a doctor I just play one on TV” except that I was a patient and it was the stage—and even now, 20 years later, people stop me in the street to say how important the play was for them and how it provided a safe place at a difficult time in their lives, either as patients or caregivers.

In NYFOS’s upcoming concert Lyrics by Shakespeare, you will be reciting selected monologues and poems. How do you approach performances of multiple short, unrelated excerpts? Do you think of it any differently than preparing a complete play in which you will spend a full evening as a single character?

I don’t really approach them differently since each piece has a beginning middle and end just like a play and of course just like a song. The joy is in communicating the beauty of the language when it is Shakespeare and so much of the meaning is carried in the language—not too much acting required

Are there any upcoming projects that you are particularly excited about?

I will be part of SummerScape at Bard on July 6 – 8 doing a piece based on T. S. Eliot’s Four Quartets. I will collaborate with Pam Tanowitz who is choreographing a piece in which the Four Quartets are set to music by Kaija Saariaho, with scenic elements from the paintings of Brice Marden, and directed by Gideon Lester. In the fall I will do Rebecca Gilman’s play Woman of the World at 59E59 Theaters.

Have you attended any theatrical productions recently that you’ve especially enjoyed?

Return to Reims at St. Ann’s Warehouse, Miss You Like Hell at the Public Theatre, The Band’s Visit on Broadway

When you aren’t acting, what is your favorite way to spend your time?

I like to garden and read novels and travel.

It’s (a presumable steamy) July in NYC. As a longtime Brooklyn resident, how do you enjoy (or survive) the city at this time of year?

I actually LOVE New York in the summer—it becomes a tropical island and since we live near Brooklyn Bridge Park we can go and wander by the water.

I’m typing this while listening to Etta James.

I love the way in which a song captures all of life and the mysterious way in which music takes you away and up and down and around and through.

Well I can’t possibly answer this question but two possible contenders are “Ode to Joy” and Leonard Cohen’s “Anthem” but that is just tonight because there are at least a hundred songs that make me weep—another is “Easy People” by The Nields.

NYFOS turns the spotlight on some of our favorite artists in our new Artist of the Month series!