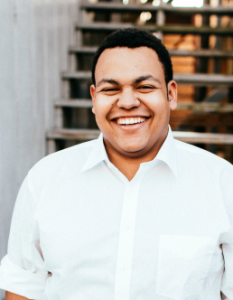 Artist of the Month features British-American tenor Joshua Blue. A current Masters degree student at The Juilliard School, Joshua received the Ellen Lopin Blair award for First Place in the Lyndon Woodside Oratorio-Solo Competition held annual by the Oratorio Society of New York last spring, as well as an Emerging Artist Award in the 2017 Opera Index Competition in New York City. A NYFOS Emerging Artist program alum, Mr. Blue will return to NYFOS at the end of the month in our Protest program in NYC and Hudson, NY.

In addition to being a fantastic tenor, you are also known for your dedication to activism. How did this become a part of your life?

I think it’s difficult to be a minority in today’s society and not be an activist in some way shape or form. As a black man, simply waking up and going outside to work on my art, or to sing a concert, or to do outreach, is a form of protest against a system that doesn’t always want to see me succeed. I think once I realized that, I realized that I can take it farther, and go from just being a singer, to being a singer with a specific voice for very specific things.

How do you combine activism with your work as an artist?

The classical arts have always been a platform for protest from the very beginning. As a singer, I have the luxury of having “x” amount of ears listening to what comes out of my mouth. I figured if people are already listing to me, why not say something worth hearing. I try to be an advocate for people of color in the arts, not because there aren’t any others, but there aren’t enough of us out in the spotlight. I try to keep my hair long in its natural Afro to normalize black hair on the classical stage. I work with people of color or with allies to people of color every chance I get, because when one of us advances, we all advance, you know? Ultimately I want what I have to say to be worth hearing, and to hopefully change someone’s mindset on what it means to be a person of color not just in the arts, or the United States, but in the world.

Are there any artists or activists who have served as particular inspirations or role models?

Every black classical singer is an inspiration to me. It sounds cliche, I know, but seeing people of color take on some of the worlds greatest stages inspires me to do better every day. Outside of the “classical” genre however, I would say I’m inspired by artists like Logic, Kendrick Lamar, Lauryn Hill, people who aren’t afraid to use their immense power and wide reaching platform to speak out against injustice.

You are at the beginning of your career as a singer. Have there been any experiences or aspects of the business so far that have particularly surprised you?

I don’t think I’ve been particularly surprised by many aspects of the business so far. Of course, I only have a few years of “professional” experience under my belt, and I have no doubt that there are plenty of surprises in store for me in the future!

I’m currently working on a project that is very close to my heart with a dear friend and phenomenal composer, Andrew Seligson. We are working to create a through-composed song cycle called Break Your Chains. The piece is an exploration of the history of the Black man in America, from the slavery era, through to modern day police brutality and racial divide. This is so exciting for me, because it’s the first time I will sing something not only written for my voice, but written for me entirely: for my experiences, and my people. I’m thrilled to get the opportunity to share it with the world this May 10th at my Juilliard graduate recital in Paul Hall!

Are there any popular musicians of today that you listen to or who you think are doing interesting work?

The artists I mentioned earlier are all artists I constantly listen to. On top of that I also enjoy Childish Gambino, Snarky Puppy, Haius Kaiyote, Andrew Bird, and Jacob Collier to name a few. They’ve all got such incredibly unique styles that make them intrinsically, well, them. I love music that fights against the grain of modern society. Whether it is because it tackles heavy, “taboo” subject matter, or approaches harmony and rhythms with a particularly non-western style, anything that sets an artist apart from the pack catches my ear every time.

The album Awaken My Love by Childish Gambino

Those that know me, know that the three things I’m most likely doing when I’m not singing are eating something new, playing videogames, or acting as the Dungeon Master for tabletop role playing games like Dungeons & Dragons. They are all wonderful escapes from the stage that I couldn’t live without!

Song is such a unique method of music making. While I will always love opera dearly, there is something that song can do which is not always possible with opera. Tell a thousand different stories. You are more or less constrained to a few lines of thought when tackling a character in an opera production. This is not to say that you can’t evoke natural emotion, in relation to you the individual taking on the role, but at the end of the day, Mimi is still going to die, Faust is still going to make a deal with the devil, and Ariadne is still going to have to take the stage with Zerbinetta and her crazy comedians. With song though, every single piece has the opportunity to harbor a thousand messages, to encompass hundreds of different emotions, to tell a new story every single time. When someone sings song, they are given an opportunity to bare their soul to the world, to behold the divine, to create new meaning. I think that if opera is the force that keeps world spinning, song is the force that pushes the world around the sun. Both equally important, but vastly different.

Right now my favorite song is “Everbody” from the album of the same title by Logic. This whole album means a lot to me, but this track in particular focuses on Logic’s struggle of being both black and white. While I am proud to represent all my beautiful Black brothers and sisters, I am still a biracial human being. And sometimes that part of my identity gets swept under the rug when people look at me or work with me. I’m proud to be both black and white, and to see someone like Logic take pride in his biracialness, I can’t help but smile. I can’t recommend this album enough. Even if you aren’t a fan of rap music, I would implore you to take a moment and sit down with the words, even if you’re just reading them rather than listening to them. He talks about being mixed race, about being below the poverty line, about living with anxiety, about the value of life and suicide prevention, about the state of the nation and the current political climate. It’s all genius. Plus if you listen to it, you get to hear Neil deGrasse Tyson speak in a bunch of the tracks, which is definitely an added bonus.

NYFOS turns the spotlight on some of our favorite musicians in our new Artist of the Month series!