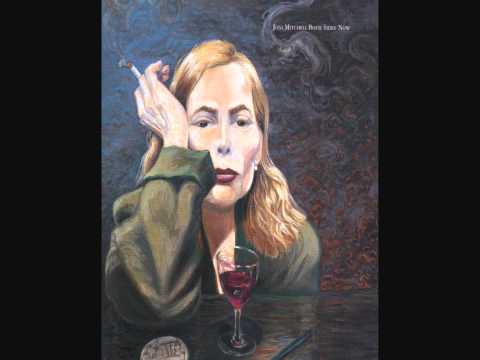 Today I’m all about multitasking. Our time together is nearing an end, yet I feel there is still so much amazing music I want to share with you! While contemplating my penultimate song selection I struggled to settle on a single artist. Thankfully, I came across my most beloved Joni Mitchell song, Both Sides Now and inspiration struck.

Now, Joni Mitchell is one of my top five favorite singer/songwriters. Her lyrics and ethereal soprano (later turned haunting contralto) sound have always resonated deeply with me. She has lead an interesting and diverse career spanning the genres of folk, pop, and jazz. Perhaps it is this chameleon-like flexibility that has made her songs so ripe for reinterpretation by other artists. Therein lies the inspiration Readers: we don’t have to settle for a single version of this fantastic song.

Mitchell wrote Both Sides Now in 1967 and while she would later record the song herself, it was premiered by Judy Collins (which earned Collins a 1968 Grammy Award for Best Folk Performance). Since then, the song has been covered hundreds of times by a vast array of artists: Bing Crosby, Frank Sinatra, Willie Nelson, Dolly Parton, Robert Goulet, Dianne Reeves, Herbie Hancock, Doris Day, Sara Bareilles, and most surprising to me, Leonard Nimoy…just to name a few (one song of the day, twelve hyperlinked videos and counting…See? Multitasking!). I am amazed by how each version differs from the next. It just goes to show that with a solid song as your foundation the possibilities are limitless. Even Joni herself took this to heart when she re-recorded the song later in life, opting for lush orchestrations that add weight and perspective to the years lived since writing the piece.

With so many amazing renditions out there, it is (clearly) hard to pin down a favorite for our Song of the Day. Luckily, one of my favorite humans has put his spin on it, making my life a little easier. Casey Breves is a dear friend and so incredibly talented that often my husband and I don’t refer to him as human at all, but as an Alien. Let me explain. See, we have this list of friends whose talent we find to be so unbelievably limitless that we’ve put them in the distinguished category of “Aliens.” They are so good, it can’t be humanly possible. It’s an inside joke, but is certainly no laughing matter. Casey’s voice is capable of incredible things. Born and raised in New York City, Casey studied at Yale where he engaged in an array of performances from opera to a capella. After graduating he joined the Grammy Award winning ensemble, Chanticleer singing in the Soprano section for three seasons. He then went on to pursue a career as a solo recording artist and has produced a diverse collection of original material and covers (several of which have gone viral on YouTube). I’m constantly impressed by his musicianship and creativity. Seriously, who thinks to combine French song with Adele? Casey, that’s who. I couldn’t dream of ending my week on this blog without sharing his immense gift with you.

Reader, I sincerely hope you enjoy Casey’s simple and honest delivery of this beautiful song. Thank you again for stopping by for this Thursday’s edition of Song of the Day. Fingers crossed, I haven’t thrown too much material at you, but if you’re anything like me there are always a dozen open tabs on the web browser anyways! Multitasking at it’s finest. Juggle on, my friends.  XO-M