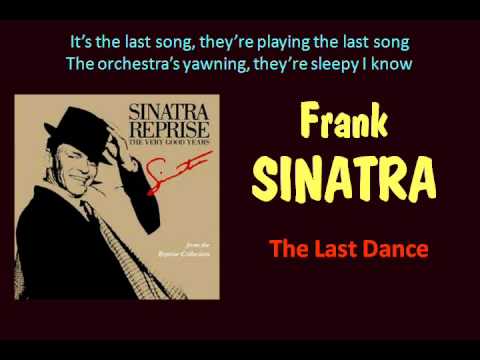 It’s Throwback Thursday! Isn’t it simply marvelous when we hear a song and we’re immediately transported back to a time and place, just by hearing a few notes. Obviously, it’s better when that reminiscing happens to be a happy memory. It happens to me quite often. I’ll be sitting somewhere and hear background music at a coffee shop or in a grocery store and suddenly, be back in a memory that I have locked to that song. One of those tunes that does it for me is Frank Sinatra’s recording of Jimmy Van Heusen and Sammy Cahn’s “The Last Dance”.

During a summer in my college years, my sisters decided to let me stay at their apartment in Seattle while they went away for two weeks. It was the first time, that I really got to experience living on my own in my hometown and promised to be responsible and not throw too many parties. Now I’ve always had a slightly different musical taste than my siblings. One evening, I opened up the sliding doors to let a breeze in and decided to listen to some music. Flipping through their CD collection, I settled upon Frank Sinatra: The Very Good Years. The CD was filled with the standard fare of Sinatra hits, but the first track was a song I had never heard. I pressed play, and a warm clarinet started it’s dance up the first lick and soon I heard that legendary croon. I then went out onto the Balcony and got swept up in the lyrics and Nelson Riddle’s glorious arrangement. There is so much to love about it. The lyrics capture that feeling of dancing with a love and willing that the song would continue for just one more measure. Sinatra never pushes or goes over the top with the vocal line. And Riddle has the clarinet and the rest of the band in a dance together for the whole thing. I probably listened to that song over twenty times in the two weeks I stayed at Chez Sister. Looking back, I think I think it gave me the feeling of being more grown up and sophisticated than I was at the time (“Why yes. In the summer evenings, I listen to Frank.”). But every time I hear that clarinet start up, I’m taken back to that college summer, sitting on the balcony with a glass of wine in my hand and a breeze on my skin.