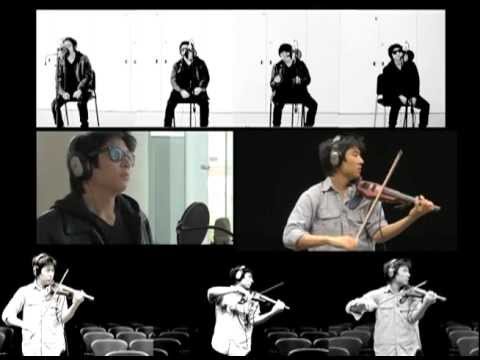 I think most NYFOS folks know Charles Yang by now. He’s our young super star violinist and more recently, he’s carving out an important career as a  songwriter and vocalist with an amazing group of three string players (two violins and bass) called Time For Three. They have been playing to much larger audiences than our normal NYFOS crowd (stadiums), and their music is getting deeper, better, and more beautiful every time I hear it. Charles was an important collaborator with us in our Beatles/Schubert show two seasons ago, but we knew him when he was a student. We decided to program “The Devil Went Down to Georgia” on one of our annual Juilliard shows. “Who do we get for the fiddle part?” we asked. Every Juilliard vocalist looked at one another and all responded in near unison “Charles Yang” . Charles already had a reputation with his classmates as the most charismatic fiddle—the guy who could pull it off in front of a big crowd. And why not? He had been on the popular radio program “From the Top” about 10 times already, and word at J’yard was out. And apparently, he had a way of being friendly, ubiquitous and charming to the vocal dept. So Charles played, and stole the show out from under Steve Blier, me, and our eight singers.  “Yeah, you guys were all great. Wonderful show. But WHO is that violinist?” That was the after concert backstage discussion over and over, until we found ourselves trudging home. Charles is going from success to success and I hope to be able to share more of his vocal talents soon. But have a listen to his “Bohemian Rhapsody from seven years ago. This guy has chops on the fiddle, sure. But his voice is a treasure. All the vocal and fiddle tracks (that means everything) is Charles Yang. He gives me energy and hope for the future.