Mary Birnbaum finished staging the show today. A minor miracle—I remember Sunday and Monday sessions (before Tuesday concerts!) permeated with under-the-gun anxiety as we routine some very complicated choreography. Kurt Weill’s Berlin is less dance-heavy, so that has sped up the footwork and traffic pattern element of getting it blocked. And that’s a blessing for us because we can now sink into the Art Part, deeper connections to the songs, refinements of the staging, language work, musical exploration. We have till Thursday, a luxury. 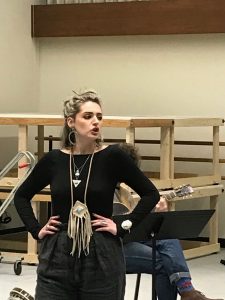 It was a day of highs and lows. Some songs flourished in amazing new directions under the guidance of Mary Birnbaum. As I’ve written earlier in the week, I have had to adjust to seeing stand-and-sing songs I’ve done for years turn into mini-scenes that pull in several non-singing performers. Mostly it’s a revelation, once I let go of my preconceptions. “Nanna’s Lied,” delivered so touchingly by Anneliese Klenetsky, took on a new life. So did Chance O’Toole’s rendition of “Parc Monceau.” There was one piece that I felt was going off the rails, though. When that happens, I try to stay out of it until the work is done. It’s a mistake to step on fellow artists when they are in the heat of creation. But I later learned that I had tipped my hand without meaning to. I thought I was giving them Resting Pianist Face as they worked on it, but Greg Feldmann, said, “Um, no. You should have seen how you looked during that staging.” Uh oh.

Mary must have seen it too, and this led to a very good discussion and a very satisfying compromise, something we can polish during the next few days. Different things bother Mary and me. Something that upsets my linear sense of logic doesn’t seem the least bit problematic to her, while a repeated lyric or a misplaced gesture that I don’t even register will pull her emergency brake. I’ve learned to be forthright about what I think. Believe it or not, my tendency is to be reticent. I have a terror of being seen as overbearing and controlling.

There were some really glorious moments today. We have a beautiful encore and the cast delivered it with such radiance at the end of rehearsal when they were dead-tired. I almost lost it.

But my favorite thing happened right at the end of the day. Mary was done with her staging and she said, “OK, that’s it—unless you want to work on something, Steve!” I did. “Hey, let’s do ‘Bilbao.’” The number was almost-but-not-quite working, but I saw an opportunity. Jessica Niles, a wonderful singer at school and friends with everyone in the cast, had stopped in to listen for a while. I always make the sarcastic comment, “Oh, that just needs an audience,” after a particularly gruesome run of a song. But “Bilbao” really did need an audience to make the necessary step forward.

The trio—William Socolof, Greg Feldmann, and Shakèd Bar—went through the piece and it was pretty good. But the tricky part at the end, when they finally “remember” the lyrics to the refrain, was not quite happening. So I did something I don’t usually do: I engineered it. “Pause before you say ‘Brazil.’ No, don’t pretend you just thought of the word, just make them wait for it. Smile with superiority. Good. Shakèd, you’re the Queen Bee. Oh yeah, raise your hand before your line—‘I got this.’ Good. Oh—high five each other after the last line. Good—I think…”

They sang the song again, and it REALLY started to cook. I am sure that having Jessica there turned us all on to deliver the goods. I did my best playing of the day—something powerful was rolling through my body and I felt as if I were on fire. And I realized that I had been longing for these moments all week. When we rehearse everyone faces Mary, who is in the audience position, while I am in back of them trying to emanate leadership and expressivity and collegial spirit. But sometimes I feel like musical Limburger cheese, exerting my influence only by wafting some kind of fragrance into the room. It was a joy to have the singers around the piano again, to be able to stop and start and work on the music—really coach the songs. I won’t have much of that time in the next few days, but I will on Monday. A special time to reconnect with the words and the music and the cast again.